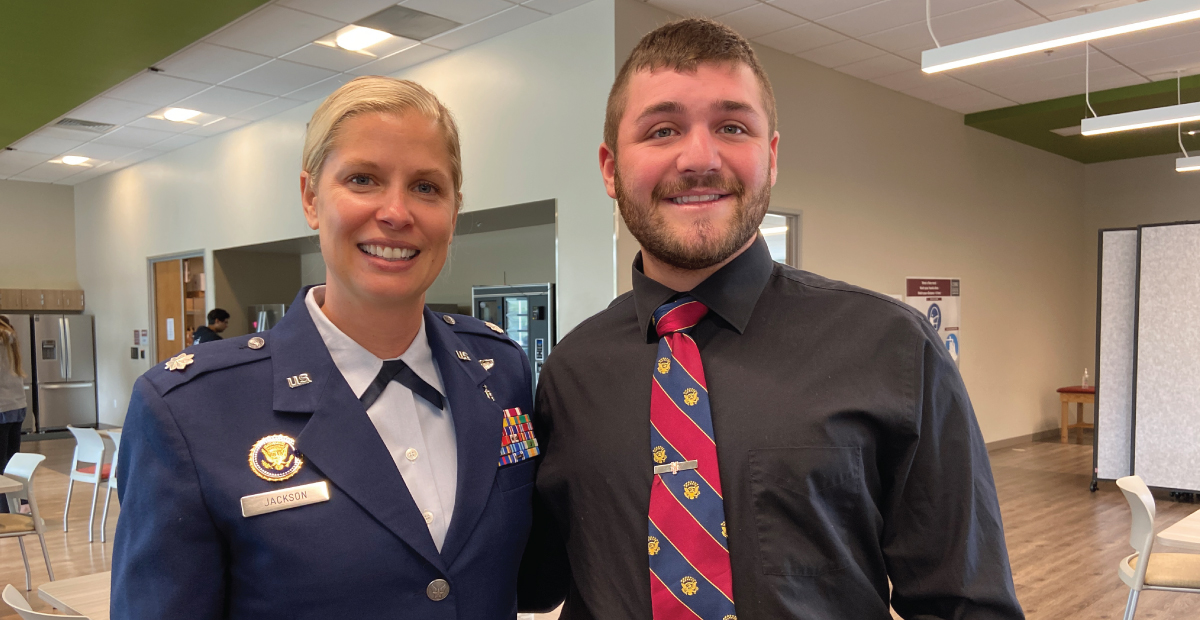 Joshua Karron, first year medical student was commissioned into the U.S. Air Force on campus on Tuesday, March 29. Karron will enter the U.S. Air Force as a commissioned officer after he completes his medical education at the California Health Sciences University College of Osteopathic Medicine (CHSU-COM) and hopes to specialize in orthopedic surgery.

Karron’s commissioning ceremony represents the beginning of his military journey, taking the Oath of Office to signify his commitment to supporting and defending the Constitution of the United States and discharging the duties of the office. It must be administered by an active or reserve commissioned officer.

JoAnna Jackson, DO, Chair of Specialty Medicine at CHSU-COM and U.S. Air Force veteran administered the Oath of Office at a small gathering on campus. Several friends and classmates observed the small ceremony and wrote notes of congratulations.

“It was an honor for Joshua to ask me to administer his oath of office,” said Dr. Jackson. “Witnessing our small group of military HPSP students grow has been such a highlight of my job at CHSU. I look forward to more ceremonies to come.”

Karron’s interest in the military started because of his great love and respect for his grandfather, who served in the U.S. Army during the Korean War.

“He was a great influence in my decision to join the military. Since his passing, I have kept his U.S. veteran hat on my wall. I’ve always had a lot of respect for the military because of my grandfather,” said Karron.

After carefully considering the opportunity to join the military and talking with classmates and professors at CHSU-COM who have military experience, Karron chose to pursue the Health Professions Scholarship Program (HPSP) where he will complete his medical education as a civilian at CHSU-COM and then serve as a physician in the U.S. Air Force as a commissioned officer.

Once he graduates from med school, he will be promoted to the rank of Captain and hopes to pursue orthopedic surgery and sports medicine – a specialty he has always had an interest in. During his time in the U.S. Air Force, he will have the opportunity to gain medical experience and pursue his specialty while fulfilling his duties to the military.

“I get to serve my country and serve the people of my country, both the actual servicemen I will be treating, and potentially their families, as well as the citizens of the U.S.,” said Karron. “I’ve always wanted to serve in some capacity.”

Karron is one of nine CHSU-COM students who have been commissioned into the U.S. military.